What is the Spiral of Life?

What is the Spiral of Life?

The Spiral of Life: All living things are connected by evolution.

Charles Darwin became famous for his realization that all species arise from a common ancestor; changing slowly overtime through the process he called natural selection. So, all of Life is connected by evolution. In one of Darwin’s notebooks (see left), we can find the first known depiction of a diagram that translates evolutionary relationships. This type of diagram is still used today, and Darwin’s science is the basis of modern evolutionary biology.

As revolutionary as this picture of life is, limitations emerged over time.  As the idea coalesced into a popular icon, misconceptions abound including that evolution is a linear process that culminated in Humans, and then stopped.

The Spiral of Life represents a new understanding of evolution, emphasizing thecommon origin, and the equality of all livings things. The organic shape of the spiral also connotes a sense of Life that is bigger than one animal or cell, as a whole. Life is an exploratory force, constantly modifying itself to adapt to its changing environment. The spiral also indicates time using tree-ring-like rings, and its branches continue past the “today” line, reminding us that evolution is an on-going process.This image also reminds us that as much as life changes to meet the environment life, including humans, change the environment, too. 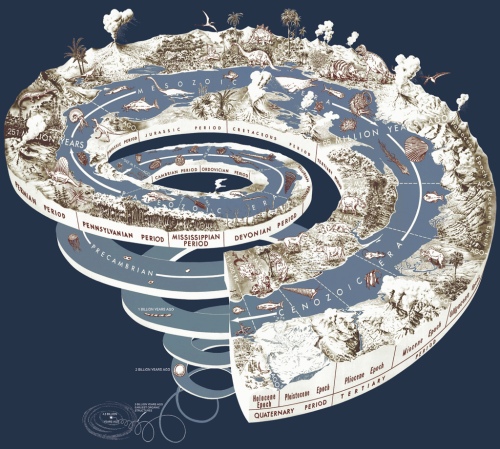